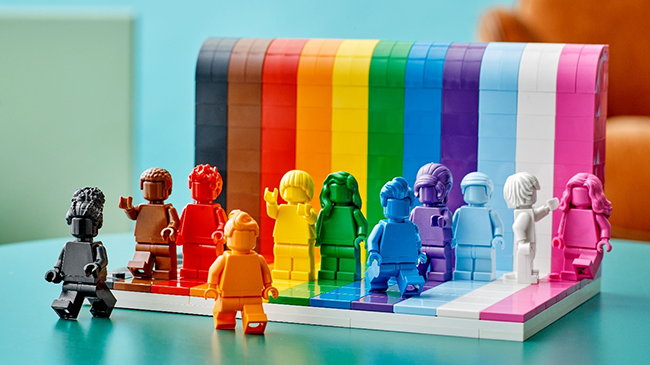 A campaign by the Danish-headquartered toy company LEGO, Everyone is Awesome, has been announced as the year’s best Pride-focused activation at the UK’s Outvertising Awards, which recognise the best of LGBTQ+ inclusive advertising.

LEGO’s Everyone is Awesome builds on the toymaker’s commitment to a broader purpose to ensure all children, and adults, feel represented and welcome in the LEGO universe.

This Pride activation, developed by the brand’s in-house agency, involved the creation of an LGBTQIA+ LEGO set designed by LEGO’s VP of Design Matt Ashton to celebrate the diversity of the world.

“We wanted to show the LGBTQIA+ community, especially LGBTQIA+ fans and employees, that we truly value them and their creativity, and in using our global brand platform and channels we wanted to clearly show that we are behind them,” the brand writes in the case study, which WARC subscribers can read here.

The campaign went out organically across LEGO channels, including social media (Facebook, Twitter, Instagram, LinkedIn and YouTube), LEGO stores, LEGO.com, the AFOL (Adult Fans of LEGO) network, LEGO Yammer Groups, and an internal campfire was as much about looking out as in.

The campaign earned significant reach across major national and international news publications and channels, far beyond its original market, and saw heightened conversation on the brand’s proprietary LEGO life app, a safe social network for children who are LEGO enthusiasts.

The aim of the Outvertising Awards, which were announced at an online event on Thursday, is to encourage entries that go beyond “rainbow washing” to truly support the LGBTQ+ community by showing some commitment to the cause rather than just “being there”.