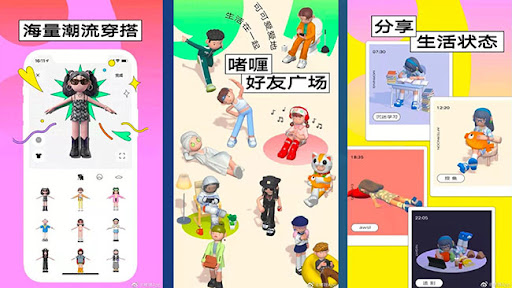 Chinese Gen Zs want to go beyond WeChat’s static, text-based experience and are using a new app, Jelly, to express themselves through avatars that point to how users might adopt the metaverse around the world.

For the next phase of the internet, the metaverse is conspicuous by its theoretical status. Virtual worlds exist but are they the metaverse?

But a new report on Jelly from KrASIA, while acknowledging some of its security and copyright shortcomings, illustrates how young people in China are deploying metaversal experiences. Despite its popularity, those copyright concerns saw it removed from app stores, but users are desperate for its return.

Crucially, the experience allows expressions to transcend a single platform. While brands are licking their lips at the possibility of selling zero-margin goods in a virtual world, it’s more instructive to look at what younger users are actually doing about cross-platform, virtual experiences.

Jelly, which launched in mid-January and less than a month later topped some of China’s app charts before disappearing, allowed users to make a cartoonish avatar with cute gestures. The character in image or video form can then be posted to WeChat, providing encouragement for more users to sign up.

The point for many users, explains KrASIA, is not to be able to buy stuff for a virtual character but being able to create a virtual presence. In-app, users can then mingle in “apartments” with up to 50 others, communicating via texts.

This is no zero-sum game; Jelly is unlikely to unseat WeChat from its super app status any time soon, but the rise of Jelly reflects how younger users feel that fun is to be had elsewhere, while WeChat serves reliable functions.

“Even though there are similar games with character customization, like Zepeto, I think Jelly’s characters and clothes look better.” Wenjing Chen, user, speaking to KrASIA.