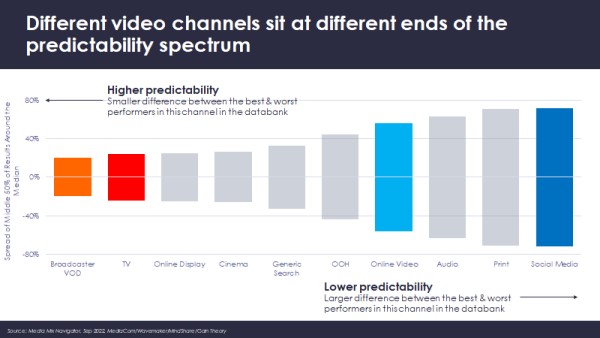 BVOD advertising adds reach to a linear TV campaign and is the least risky of all video advertising channels – including linear TV – in terms of predicting a return, according to a new Thinkbox study*.

Surprisingly, there’s been relatively little large-scale evidence about the effectiveness of BVOD, despite being an important channel in the growing connected TV world.

Broadcaster VOD advertising in the UK is rapidly growing, with investment up 17.2% in the first half of 2022 and continued growth forecast, according to recent Advertising Association/WARC figures.

“Variability of delivery varies greatly across the video channels and we can see that BVOD has good predictability” – Jane Christian, Head of Systems Intelligence at Mediacom.

*Commissioned by industry body Thinkbox, BVOD Almighty: Reach and Return claims to be the most comprehensive exploration of BVOD advertising to date, bringing together different research skillsets and techniques, including work by Gain Theory and MediaCom, Wavemaker, Mindshare, PwC UK, and Acacia Avenue.