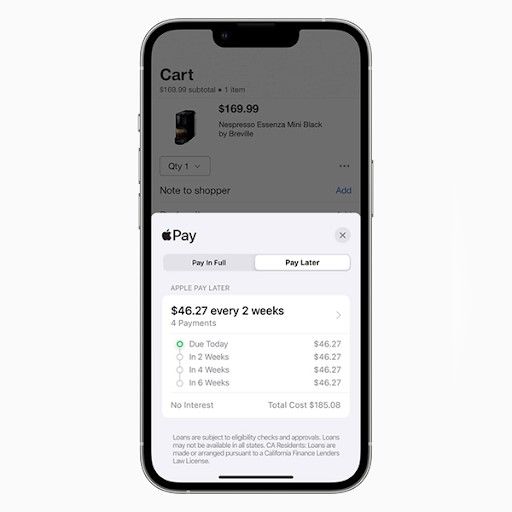 The iPhone maker is getting in on the Buy Now, Pay Later market in the US – and it’s safe to assume it will do so around the world soon – adding the capability to its widely-used Apple Pay system.

Apple will offer Apple Pay users to split payments into four equal payments over six weeks without interest or late fees. Open to “qualifying applicants” in the US when iOS16 comes to iPhones later this year.

For apps and websites selling to US consumers, this news means that you have to do absolutely nothing. The expectation will be that this will cause some of your consumers to spend more, which sounds like good news for marketers. However, there are bigger questions.

Buy now, pay later services like Klarna and Affirm are positioned as a more accessible credit system. Surveys differ but global usage is growing while interest in the services remains strong.

But where it gets interesting is how the battle is won – at least if C+R Research’s online poll is anything to go by: that PayPal Credit is the most popular service (used by 57% of respondents) implies that this is all about convenience.

Given that Apple’s iOS is on around 51% of US smartphones, it’s hard to see the competition mounting a robust defence at a time when they are cutting headcount amid dramatic falls in their stock prices.

It had been rumoured ahead of launch, with reports of Project Breakout suggesting that Apple was exploring a move away from working with payment processing partners as it built out its own financial back-end capabilities.

However, Apple says this system will be powered by the Mastercard network, ensuring that the service will be available anywhere that takes Apple Pay across the US, including online and in-app payments.

It follows the acquisition, earlier this year, of checking service Credit Kudos, which is based in the UK, implying the service will eventually arrive on British shores.

An appetite for risk

While presumably Apple began working on such an offer prior to the inflation crisis now engulfing the global economy, the move does open Apple up to more regulatory scrutiny should authorities believe that it is causing users to become over-leveraged with repayments. By commoditising borrowing to such small amounts, are there echoes of 2008 here?

But there’s another question: is it right that a firm of Apple’s size can make such a change and, in effect, train its Death Star laser onto a significant, if imperfect, ecosystem of fintechs that had attempted to compete?