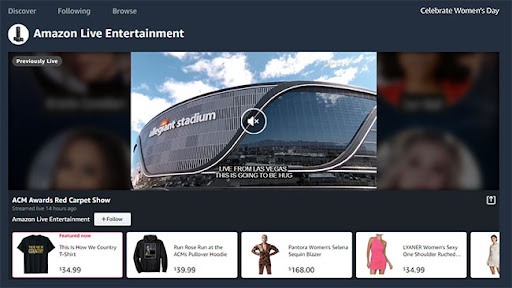 Amazon's Country Music Awards and the near future of shoppable TV

Amazon doesn’t just step on sporting toes; this week saw the e-commerce and streaming giant air the 57th Academy of Country Music (ACM) Awards for the first time ever, in a sign of what’s to come for major shows: a future in which most things you see, will be for sale right there.

Amazon took some time to build the capability to do live shows. While some of its early tennis streaming was troublesome, its Thursday Night Football broadcasts and now the ACM awards are part of its stable.

“Now that we have the technology to be able pull these off, it’s pretty exciting to be able to lean into these big cultural moments around content,” Amazon Studios’ chief Jennifer Salke told Vulture.

What marketers need to know

For marketers, this is a double-edged sword. The show, which usually contains a lot of advertising (which also helps the roadies set up between different acts) will only contain slim promos for Amazon products, meaning one less 6-10 million viewer opportunity.

However, the really interesting thing is that Amazon will switch monetisation strategies by replacing ads with live shopping. While this has been a staple in China and other parts of Asia for several years, the online QVC style has struggled to take off in the West; however, with this rejigged formula, Amazon is thrusting the capability into a memorable online concert experience similar to its Prime Day concerts.

As well as the awards show, red carpet, and recording, all of the content will be shoppable on Amazon Live. When viewers see a garment, album, book – or perhaps even a Stetson – they like the look of, they can buy it from a tile just below the video pane.

While the idea is in an advanced testing phase, given that Amazon only has the rights to the ACM awards for a year, it’s rarely wise to bet against Amazon.

For marketers, the trouble won’t just be in measuring ratings; the entire idea recasts the relationship between content and commerce. The trouble with the you-see-it-you-buy-it model for many marketers is that very few of the artists did their laundry or opened a bank account on stage.

But the capacity aims bigger, to a bolstered advertising offer where high reach and immediate shopping are fused in one ferocious package. Should it work, the future of marketing is going to involve a lot more Amazon.