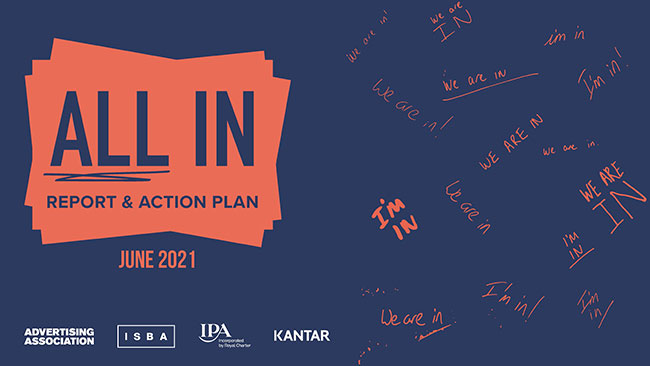 All In census reveals extent of inclusion problem in advertising

Improving representation of black, disabled and working-class people within the advertising sector is a priority, leading figures say, following the results of a major survey into the make-up of the industry’s workforce.

The All In Report, published by the UK industry’s Inclusion Working Group, formed by the Advertising Association, IPA and ISBA, surveyed some 16,000 advertising professionals, representing, it is believed, just under 20% of the UK’s ad industry population.

“It is now time for action. Our census results have provided the benchmark data we need and the way forward is clear. We urge all companies in our industry to engage with the All In Action Plan to help make rapid progress on these critical areas. Everyone deserves a workplace where they feel included and it is in our power to make that happen now. The benefits, social and economic, will be huge as we build our way out of the pandemic” – Kathryn Jacob, CEO Pearl & Dean and Chair, Inclusion Group