One of the global leaders in AI, Google, is using the technology to create consumer-centric interaction using data points to identify intent and passion, writes Katie Sterling

As consumer behaviours are increasingly complex AI has an integral role to play. According to Samuele Saini, Head of Strategy and Insights at Google Singapore, its “company proposition has moved from mobile-first to AI- first”. They now look towards machine-learning as the core route to re-thinking everything they are doing, the audience at the MasterCard Innovation Summit 2017 (Singapore, September 2017).

Saini cited that Google used to run a survey around how many times people were online (E.g.: once per day, 2-3 times) but had to stop asking these type of questions now, as people check their phones 150 times per day. In actuality what matters is what consumers do when they are online and how machine based learning can bring you closer to understanding changing behaviours.

“If you look at where consumers were 5-10 years ago demographics and location were the targeting options for a TV campaign. You just needed to know you are in Singapore and aiming for a certain age group and that was the way for a brand to reach consumers”.

Nowadays, that complexity has completely exploded. 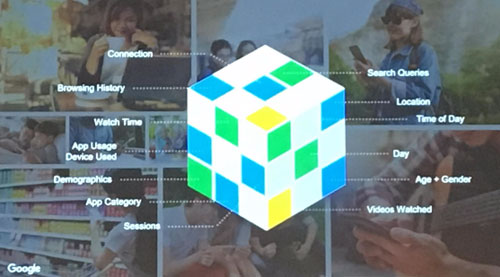 As a result at Google “We do not think of big data – because data is big by definition” and machine learning (a method of artificial intelligence) has become essential. In fact, Saini said “It is already powering most of the solutions you are using”. As an example, the suggested reply on Google Mail is already being used daily and getting smarter and smarter.

The search business, which remains at the core of Google, has transformed drastically too. There used to be a time where we used to manually bid on key words, but all that is now gone with machine taking over. Search is being completely renovated in a way to make it scaleable and useful as a system via AI (see below). 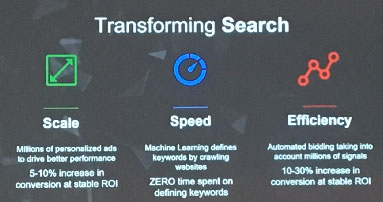 Furthermore, when it comes to improving consumer-centric interactions (from both and end user and partner perspective) there are three clear types of opportunities that are opening up:

Machine based learning has completely changed the approach to problem solving. Its success is based on the ability of the system to recognise and these examples are still based on traditional interactions, however, voice assistance and photo recognition will change this even further – the impact of this progress will soon become apparent.