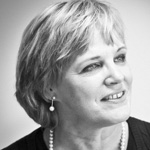 Jane Frost, CBE
Businesses must stay close to customers in pursuit of post-pandemic growth
08 February 2021 • Growth is going to be hard won over the next few years and will require businesses to pay more than lip-service to "customer-centricity". Listen to your insights team, says Jane Frost, who also advises those same teams to start talking the language of business.

Jane Frost is responsible for the leadership of MRS. She was previously at HM Revenue & Customs where she developed and led the individual customer function and the behavioural evidence and insight unit. Before moving to HMRC in 2006, Jane held senior roles in both public and private sector organisations including Shell, Unilever, the Department of Constitutional Affairs and the BBC, where she was responsible for the iconic 'Perfect Day' campaign which, as well as winning advertisement of the year, raised £2.5m for Children in Need.